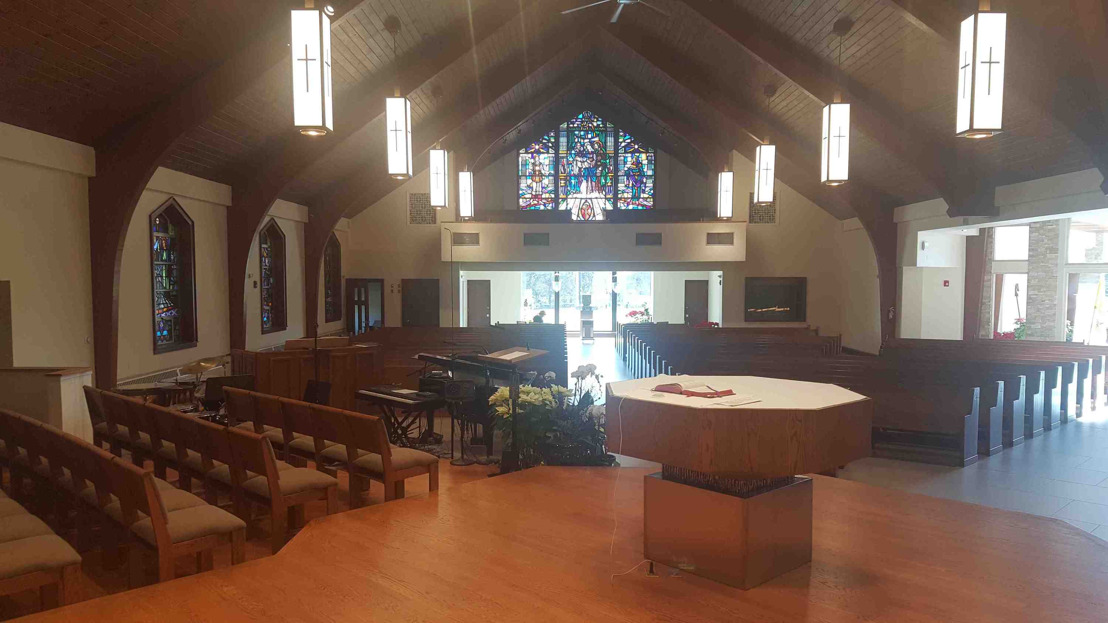 Upper Saddle River, NJ, June 4, 2019 — Founded in 1961, Church of the Presentation in Upper Saddle River, New Jersey, began with a congregation of 270 families. Since then, it has brought together more than a dozen times that number of families over the last half-century, making it the largest parish in the Archdiocese of Newark — but, until recently, the church had not made any significant renovations to its original design. Rather than build a new church altogether, the parish raised over $6 million to overhaul the original building in order to accommodate its growing flock, and in early 2017 crews began construction on an ambitious design intended to open up more available seating for the burgeoning congregation. However, the design for the new worship space created a unique set of acoustical challenges when it came to plotting out and installing the renovated church's sound system, which is powered by Powersoft Quattrocanali 1204 amplifier platforms.

Not your average house-of-worship
While Church of the Presentation was originally designed in an L-shape made up of two separate, rectangular spaces — a more narrow, traditional worship space on one side and a boxier, 800-seat auditorium and meeting space on the other, separated by an 84-foot interior wall at the right angle where the two spaces meet — the renovation architects had to find a way to create more space for larger services, yet still allow the auditorium to operate independently from the usual worship space when additional seating is not required. To accomplish this feat, they came up with an innovative set of solutions: To remove the wall and architectural trusses separating the auditorium from the church, build a new 40-foot-high glass and steel narthex extending out from the right angle formed where the original rectangular spaces meet, and then move the altar to a pivot point in the corner facing the two largest seating areas, forming a 90-degree contiguous worship space with the original nave to the left of the altar, the newly built narthex in the center and the open auditorium space on the right extending back past the pews in the transept, giving all available seating areas a clear sightline to the altar. In addition, the plans included installation of a moveable soundproof wall, providing the option to separate the auditorium from the nave, or — when opened for larger church services — to supply enough seating for a total of just over 1,200 congregants.

"The church, having a rectangular shape, has different acoustics when the moveable wall is there than it has when the wall is not there," said Steve Minozzi, co-owner of Monte Bros., the Westchester, New York-based audio systems design and integration firm that performed the installation. "When the church and the auditorium are together, the sound system requires a whole different configuration of time alignment and EQ, because the two discreet spaces have different acoustical properties."

Monte Bros. came on board during the early stages of the renovation to pinpoint the most effective speaker locations before construction began. Based on the integrator's database of house-of-worship system blueprints, Monte Bros. designed a hybrid point-source/distributed speaker sound system for each of the possible configurations distributed to over 12 zones, using an estimated 15,000 feet of cable wire. "Because of the amount of power required for that amount of wire, and because all of 12 zones had to be amplified independently, we needed an amp that could handle it," Minozzi said. "That's one of the reasons we chose Powersoft."

Using three Powersoft Quattrocanali 1204 four-channel amplifier platforms, Monte Bros. powered each zone with one discreet channel per zone. "We use the Quattrocanali amps because, first of all, they are highly reliable," he said. "For us, dependability is extremely important. And when it comes to the support we get from the manufacturer, Powersoft gets an A+. I don't get music on hold or a robot when I call. Powersoft operates on a human level. That's what I need, and that's what any contractor needs."

Value added: security and streaming capabilities
While reliability, power and build quality — in addition to top-notch customer support — have become some of the main reasons Monte Bros. recommends Powersoft in many of its house of worship installations, Minozzi specifically chose Powersoft Quattrocanali 1204 amplifier platforms for Church of the Presentation in order to provide it with an additional service.

"In a space as big as Church of the Presentation, an owner may not know when a speaker is not working until people start to complain," Minozzi said. "That's a typical sound system company's scenario. At Monte Brothers, we offer houses of worship our ability to monitor that sound system remotely, so that, if a speaker goes down, we will be notified through the Ubiquiti cloud – an intellectual property we built. But in order to do that, the amplifier has to have that capability."

Monte Bros. partnered with Powersoft to develop a technology to be able use the integrator's proprietary monitoring system in Church of the Presentation, and to have the ability offer it to other houses of worship in future installations."Ubiquiti Networks Secure Remote Access System is an intellectual property that our technicians developed because we've done work for the NYPD since 1995," Minozzi explained. "After 9/11, we were commissioned to build an independent communications network that couldn't be taken down if something like that ever happened again. And it required that, at every precinct, if anything became disconnected we would be notified."

The Ubiquiti network security feature — which Powersoft is currently fine-tuning for future Monte Bros. house-of-worship installations using Quattrocanali amplifier platforms — will also allow audio streaming of church services through the Ubiquiti cloud. "Say an older person passes away, and they have friends that live in Florida who can't make it to the funeral in New Jersey, but they have a smartphone. Through the proprietary technology we developed, the friends in Florida will have the ability to listen to the audio from the funeral using an app on their smartphone, which is a capability we’ve developed with Powersoft for the Quattrocanali."

ABOUT POWERSOFT:
Powersoft is the world leader in lightweight, high power, single rack space, energy efficient amplifiers for the professional audio market. Founded in Italy in 1995, headquartered in Florence, Italy, with offices in Kearny, NJ, Powersoft couples the experience and precision of its production department with exceptional components to deliver products with perfect audio response and high-performance reliability. Its state-of-the-art amplifiers can be found in an array of markets, ranging from stadiums, sporting arenas, theme parks, performance venues and airports to convention centers, churches, and clubs, and are used by the world's leading tour sound companies. For more information, visit the Powersoft website: www.powersoft.com